By the numbers - Zinchenko unbeaten in 23, Grealish loses 20 straight

Will Guardiola vs. Klopp be the next great Premier League rivalry?

QUIZ: Ronaldo? Messi? Neymar? Mbappe? Find out which star you are

Rumour Rater: Man United back in for Milinkovic-Savic? Lovren to leave Liverpool?

Inside Tottenham's summer spending: Ndombele the first signing in their quest for Premier League title

Man United vs. Man City: What you need to know about Saturday's derby

Saturday marks a Manchester derby carrying more hype and pressure than usual: even though it's early in the season, both sides are perfect in the Premier League this season and are hoping to keep that momentum going. Having spent big to rearm and prepare for a fight for the title, the winner of this one could open a little breathing room from their crosstown rivals.

We break down what you need to know.

This is it, the grand showdown between Jose Mourinho and Pep Guardiola. The two managers who have most dominated the last decade of club football -- sharing 14 league titles, four Champions Leagues and 15 other trophies between them -- are finally in the same city. The head-to-head is a little more tilted towards Guardiola, though. Out of 16 meetings so far, the Catalan has been markedly better. 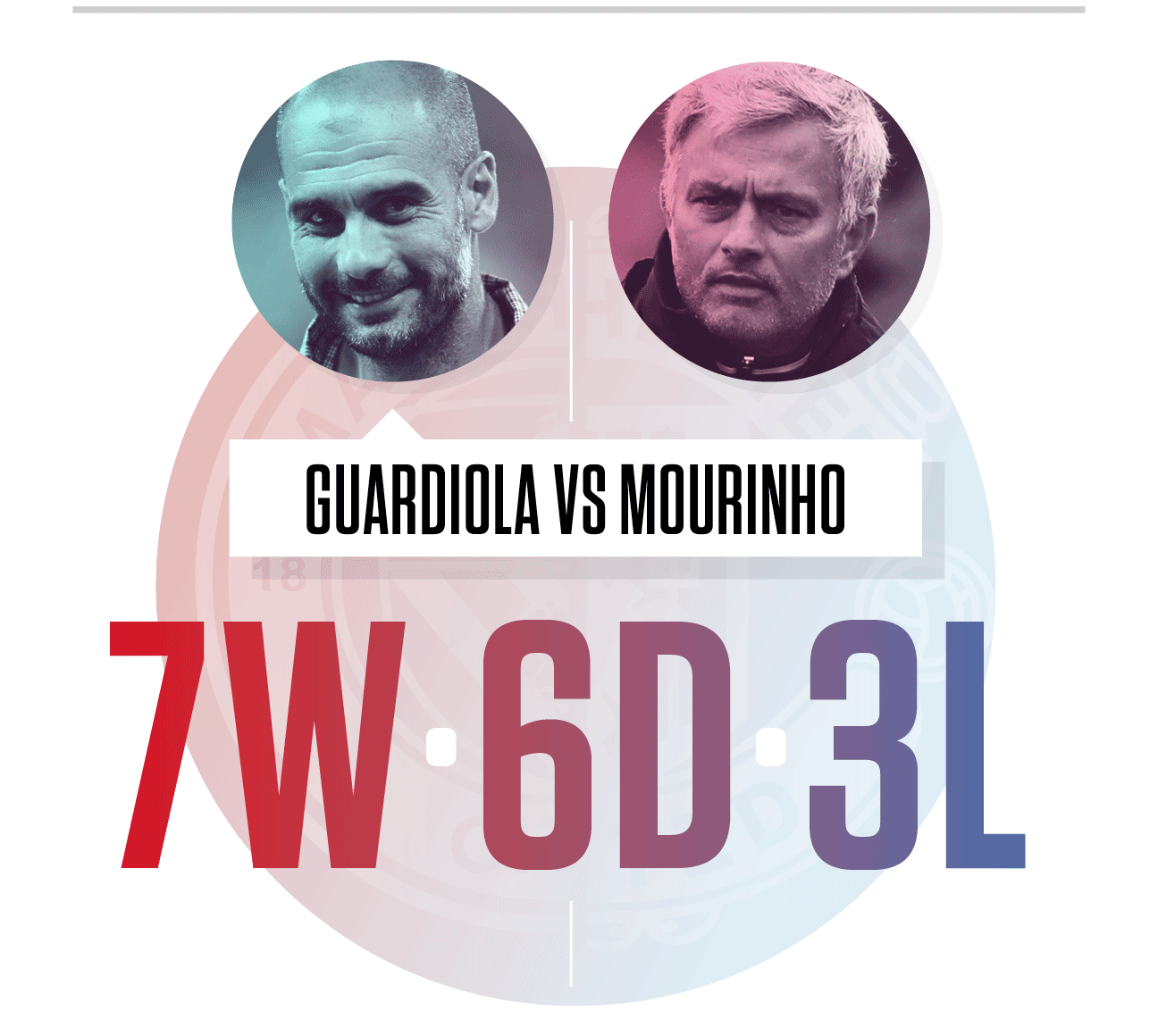 The big call with this game is over what Guardiola will do regarding the absence of his big-game striker, Sergio Aguero. Missing the match through suspension, the Argentine is the Premier League's top scorer in 2016, having hit 18 goals in 20 games. Guardiola is going to have to adapt and may start 19-year-old Kelechi Iheanacho or put Nolito up front -- or he might just do something completely different.

The tactical effect it could have on United might be just as pronounced, though. Will Mourinho be more likely to go for it without the danger of that City cutting edge?

Mourinho-Guardiola face-offs have generally been variations of reactive defence against proactive attack, but whether this game will be the same depends on how close the teams yet are to the managers' ideals.

The Guardiola effect is already pronounced. Since he took over at Barcelona in 2008, his sides' average possession has been 65.8 percent, while the highest average in the Premier League has been 52.9 percent. City's is currently 66.2 percent.

Emphasising his pressing game, meanwhile, it is telling that an attacker, Kevin De Bruyne, has committed the most fouls for City. 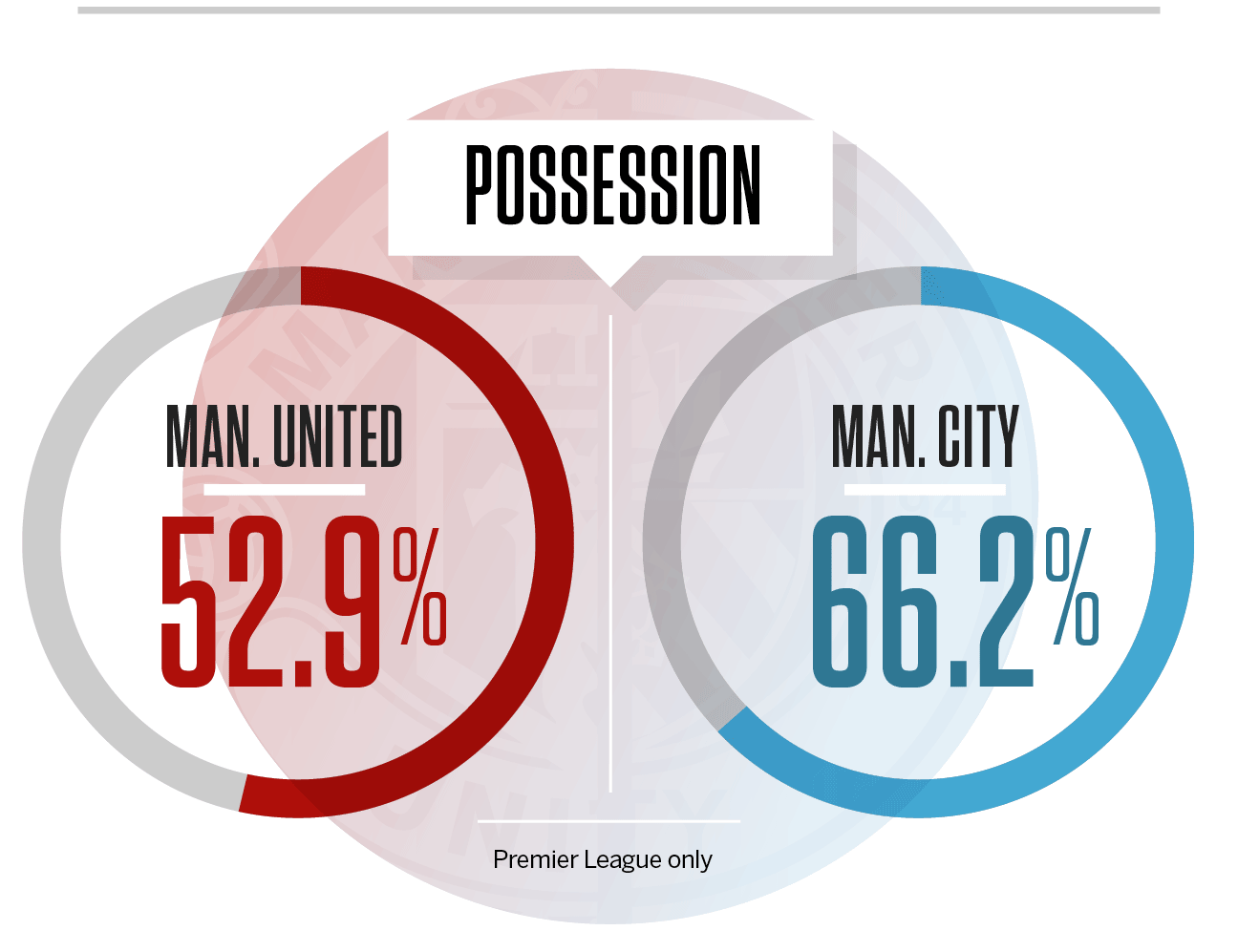 United have had 52.9 percent possession, though, and haven't scored a single goal on the break yet. At Inter in 2009-10, arguably Mourinho's best team, over a fifth of the goals were from counterattacks. 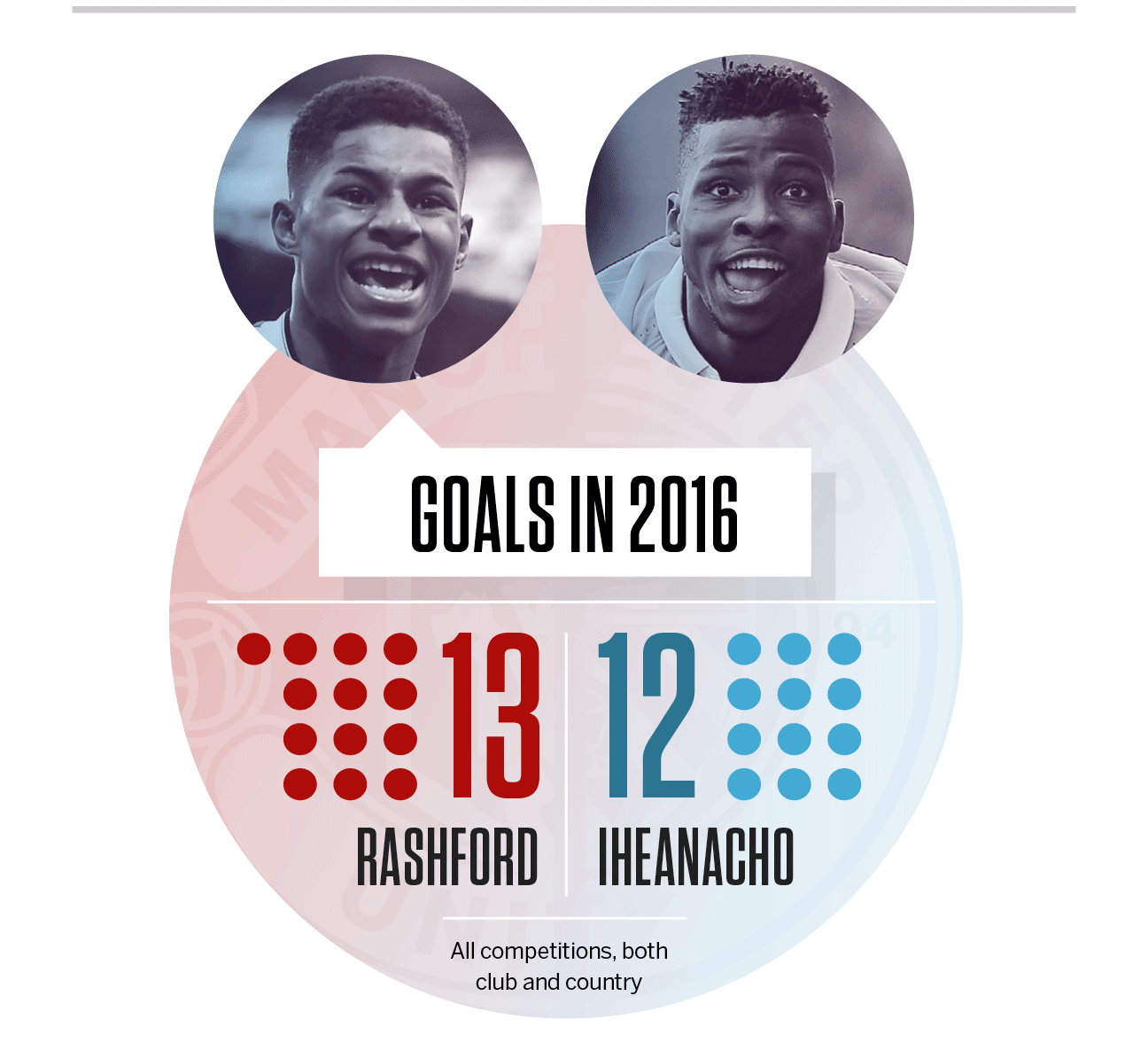 This is the first time both Manchester clubs have had a 100 percent record from their first three games since 2011-12, a title race that went right to the final second. It is testament to the effect of the two managers, but something will have to give at Old Trafford.

There is perhaps no greater illustration of the Guardiola effect than the electric form of Sterling, even if it is early in the season. He's helped provide five goals in four games, with two strikes of his own and three assists so far this season. He's on pace to smash his output last season, in which he managed 11 goals and 8 assists in 47 games (all competitions). 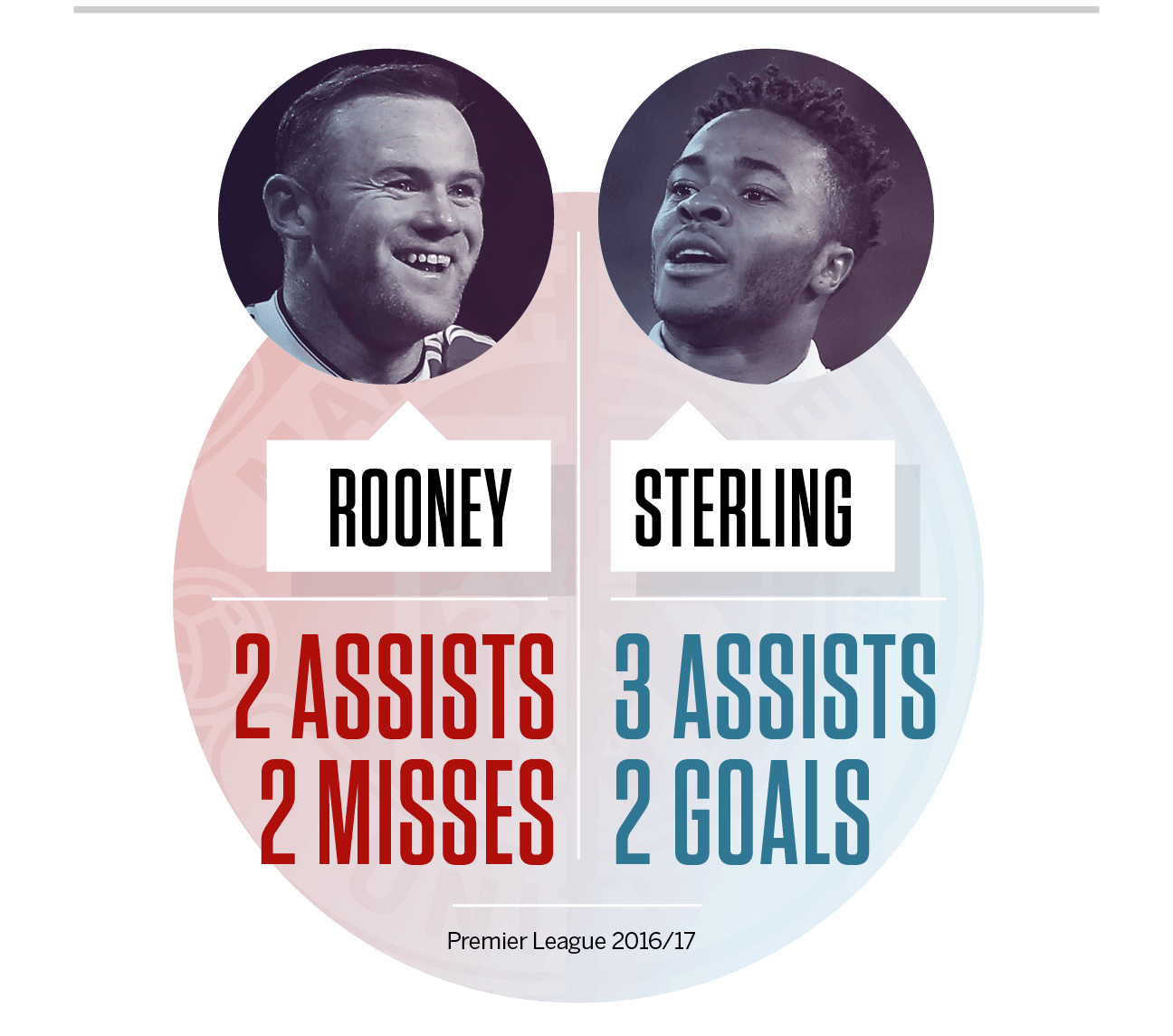 Amid all the argument about whether the captain should still be United's main playmaker, his stats almost sum up how difficult it is to call. Rooney has provided the joint most assists in the Premier League so far, with two, but missed the second-most clear-cut chances, also with two.

The contradiction reflects how he seems to generally slow down play but then offer key moments.

As good as City have been, it could be argued that this is the real first game of the Guardiola style, as he finally has the first point of attack he wanted. 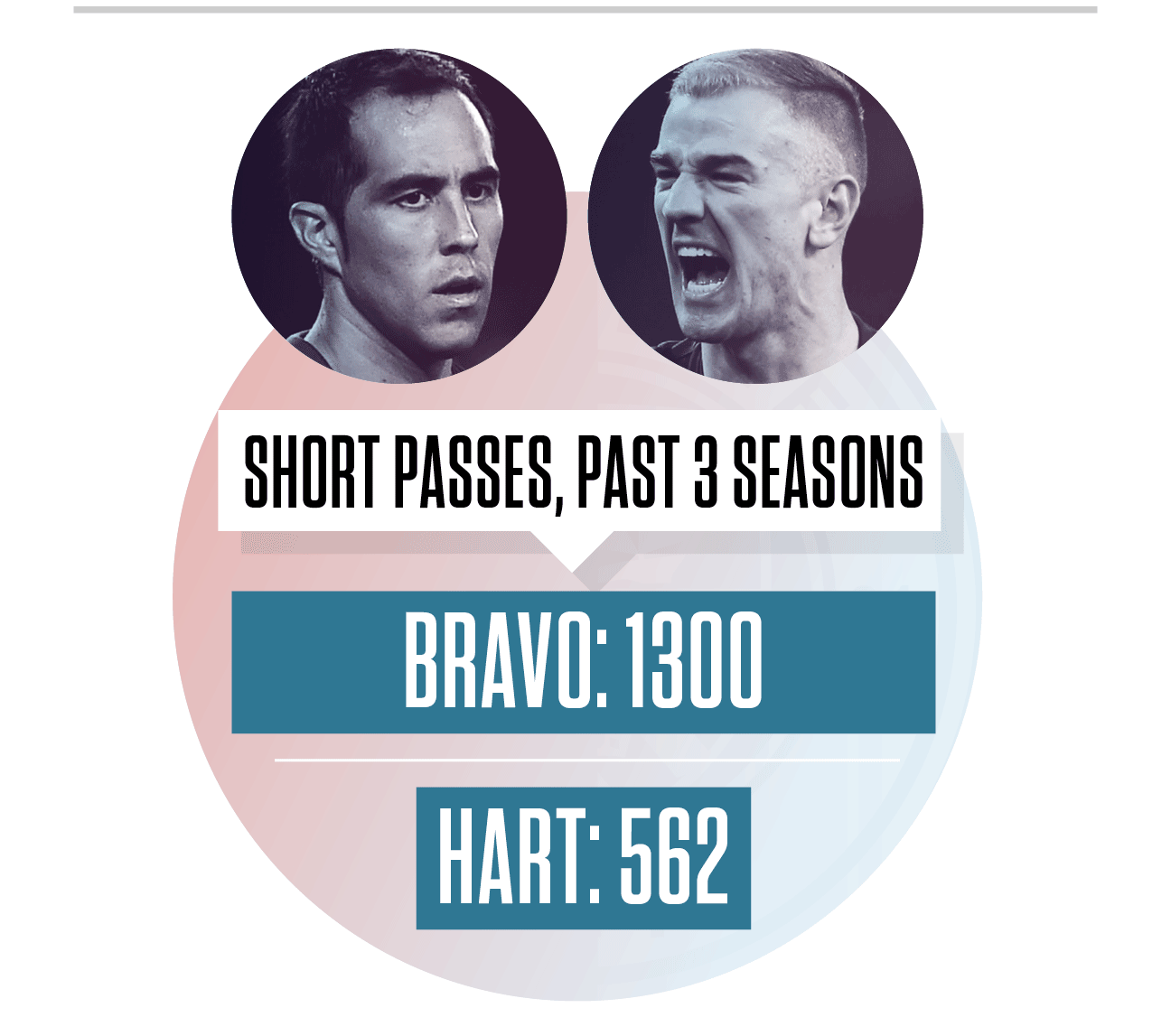 The Catalan has always insisted that his goalkeeper needs to be able to start moves, and new signing Claudio Bravo can certainly do that. According to Opta, he has played over 1,300 short passes in the last three seasons, compared with just 562 by Joe Hart.

They were underperforming players expected to be let go by their managers but have so far done fine jobs in anchoring their new teams' stellar attacks. Fernandinho has made the most interceptions in the City team, with six (two per game), while Fellaini has made by far the most tackles for United, with 3.7 per game. 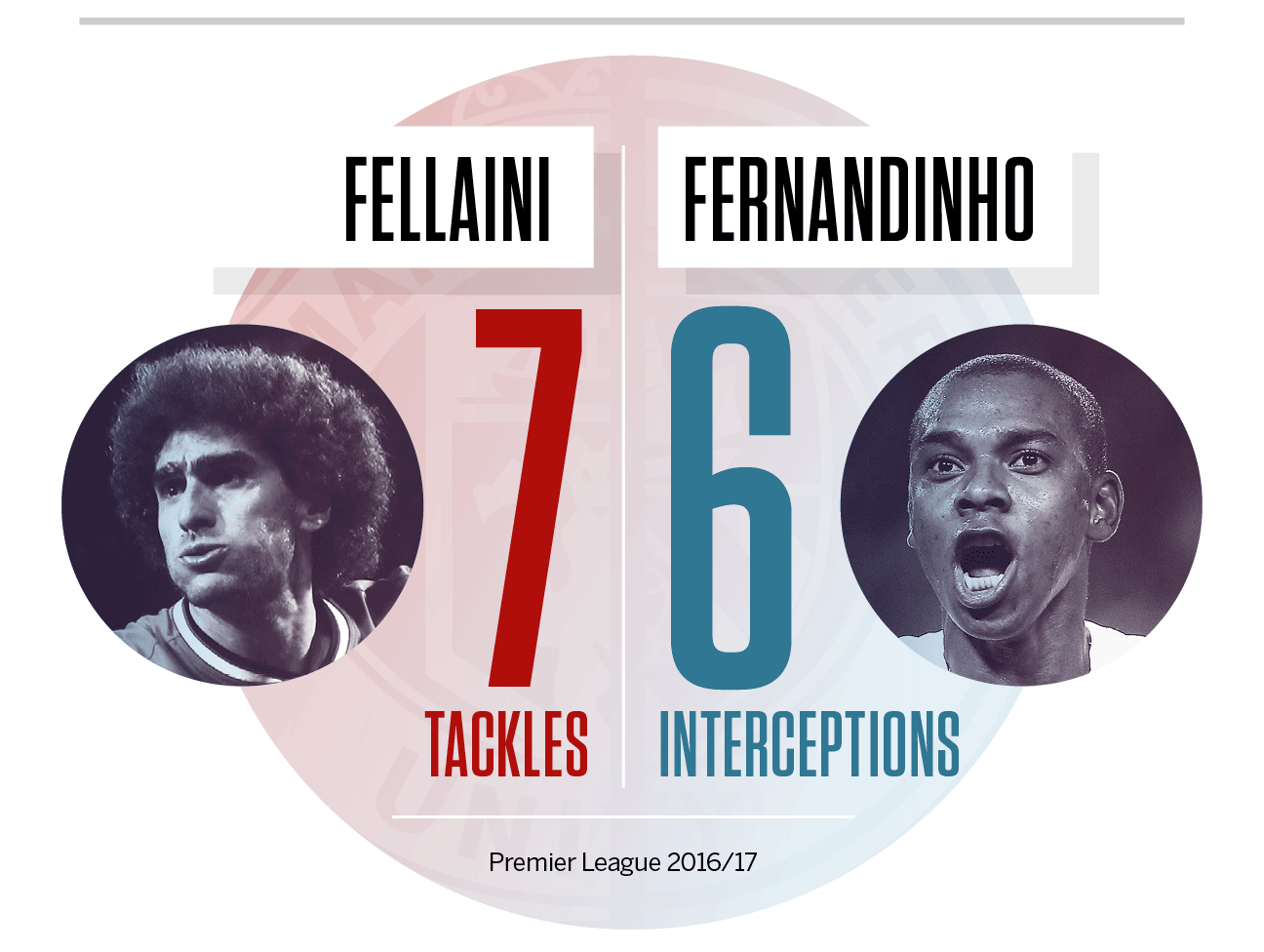 It reflects just how much work the managers had to do upon joining their respective clubs that they each signed half a team. 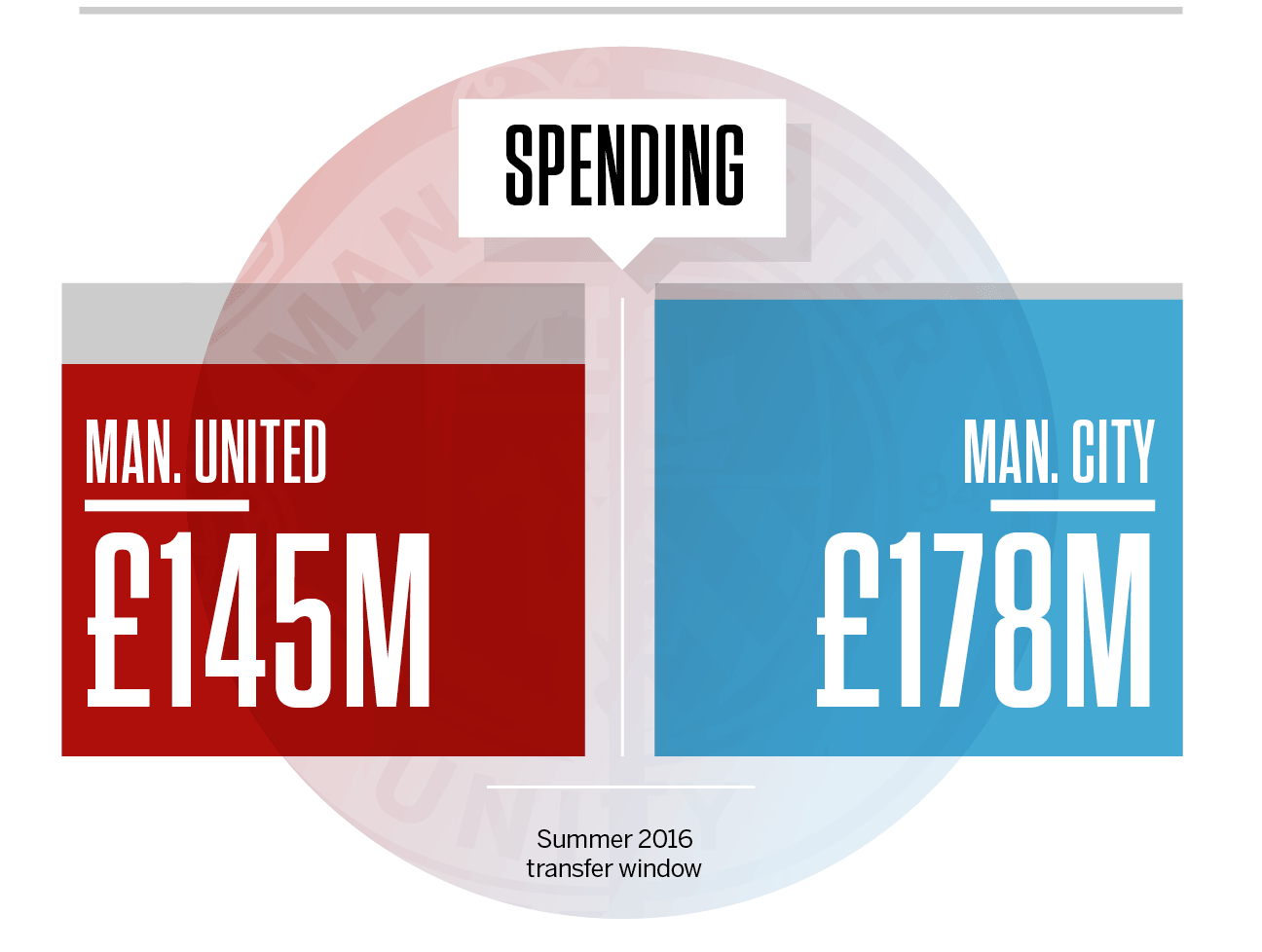 It was also an extremely rare summer when both Manchester clubs broke their own records for gross expenditure in a single window. United's world-record purchase of Paul Pogba took their spending up to almost £145 million, while City spread theirs around to hit just under £178m, the most ever by an English club in one window.